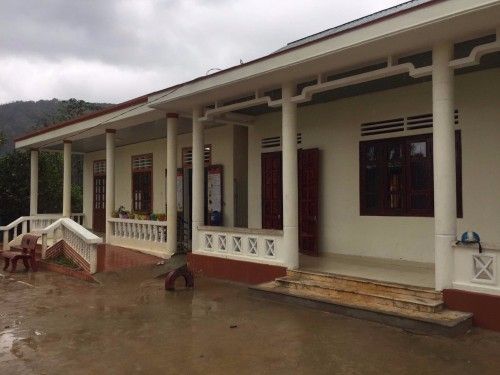 Ruong Village is in a mountainous region approximately 8km to the North of Khe Sanh town. The majority of the local economy is based on subsistence farming. Some coffee is grown and the PeaceTrees Black Pepper Project is helping local farmers raise black pepper for sale. The site that PeaceTrees uses to destroy unexploded ordnance is also located in Ruong. 3,399 people live in the Commune’s 7 villages and 79% of the population belong to an ethnic minority group. Ruong Village has 600 people living in 115 households and all villagers are ethnic minority Van Kieu individuals. 82 households, or 71% of the village households are below the poverty line. The village is poorer than the average within the commune and receiving adequate nutrition is an important issue for children in the community.

There are 69 children of kindergarten age in Ruong, but prior to construction of the new kindergarten, only 47 could attend kindergarten in the village because the space being used was a small rundown structure with inadequate facilities. The constraints of the old space meant that it was very unlikely that children would complete kindergarten ready to succeed in primary school. The Van Kieu villagers do not speak Vietnamese and have no native written language. Primary schools are taught in Vietnamese in a structured environment. Without an introduction to the Vietnamese language and classroom culture when the children are in kindergarten, it is extremely difficult for children to succeed in primary school and later as adults in a modernizing Vietnamese economy. Receiving an adequate kindergarten education provides a critical opportunity to children in the remote village of Ruong.